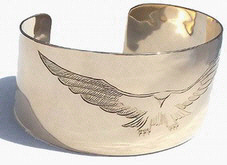 The falcon is a solar emblem for success, victory and rising above a situation. Further evidence of its solar influence, the falcon was symbolic of the rising sun in Egypt. It is also the king of all birds where many gods were shown with the head or body of the Falcon(including Ra).

Native American tradition embraces both the golden Eagle and the bald Eagle as sacred creatures. Depending on the tribe, Eagle represented bravery, wisdom, forte and as the bearer of prayers to the Spirit realm. 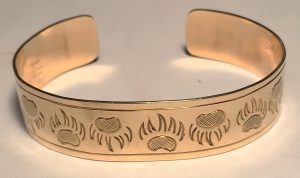 These are 2 of the early gold ones. Both were made for Marlene for birthday or Christmas. Both in 14k and were much harder for me to learn about gold than what I expected. 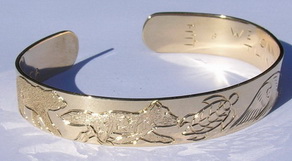 Polar Bear – The Inuit have an intimate affinity with the polar bear. One neat symbolic polar bear fact the Inuit’s observed is that the bear’s physical behavior mimics human motion (or vice versa). The polar bear ambulates (walks), sits and moves very much the way humans do. Observing this, the Inuit came to the conclusion the polar bear might be a human in white-bear clothing

Wolf – Teacher – Shares knowledge with others, aids and guides children of the earth. Strong sense of family and loyalty

Turtle – is a sacred figure in Native American symbolism as it represents Mother Earth. The meaning of the Turtle symbol signifies good health and long life. The turtle has great longevity living up to 150 years.

Owl – There were so many tribes of Native American Indians it is only possible to generalise the most common meaning of the Owl symbol or pattern. Native Indian symbols are still used as Tattoos and were used for a variety of reasons and depicted on numerous objects such as tepees, totem poles, musical instruments, clothes and War Paint.

Horse – The meaning of the horse symbol was to signify mobility, stamina, strength and power. It was so revered by some tribes that the horse also represented loyalty, love and devotion 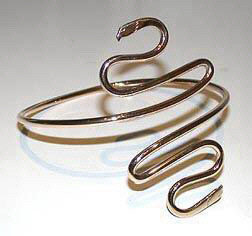 info@bearclaw.bc.ca - if form below isn't working